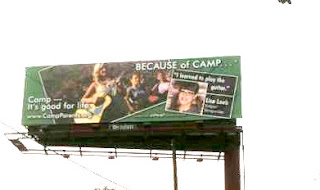 I follow @acacamps on twitter. Today they posted a picture of their "Because of Camp" billboard in Austin, Texas. Unfortunately the billboard misses the mark, BIG TIME.

For a billboard to be effective, it should contain 7 words AT THE MOST. And the words should all be close to each other and any pictures shown. Otherwise the billboard is a waste of money and won't do its job right.

The main purpose of outdoor advertising, and billboards in particular, is to REMIND people of things. I don't know if the ACA's billboard reminds people of camp. But a simple message like, "It's Time to Sign up For Camp" would do the trick a lot better than the hodgepodge of pictures and words they're using now.

How will people driving by on a street, highway or freeway grasp all these words and pictures in the brief second they're exposed to this sign?

Don't Make the Same Marketing Mistake I Did, Otherwise You Could Lose Some Very Hot Prospects!

Welcome to CampMarketingNews.com with Eric Naftulin. Get all the free camp marketing tips, ideas, and strategies you need with new blog posts added every week. Learn how to market your summer camp better and get more campers in 2022! Follow @CampMktgNews

In-person Camp Fairs are Back!

Become a vendor. Reach affluent campers in the L.A. market.

Exhibit your camp at the Thursday, March 10 Virtual Camp Fair