Home » Have You Considered a Mother’s Day Summer Camp Promotion?

Have You Considered a Mother’s Day Summer Camp Promotion?

Summer Camp and Mother’s Day Were Made for Each Other. There’s Lots of New Enrollment to Be Had By Offering a Mother’s Day Promotion at Your Camp.

One of the most effective ways to get the most bang for your marketing buck is tying in a promotion to a Holiday.

So it seems pretty clear, Holidays and promotions go together. People are conditioned to spending money in conjunction with Holidays. That’s why so many brands center promotions around them.

If you’re wondering what I’m getting at, it’s this: Mother’s Day and summer camp go together. Offering a Mother’s Day promotion is just about the most timely and relevant marketing strategy you could do.

Running a Mother’s Day summer camp promotion could be the fastest way to generate a huge bunch of enrollments in the shortest possible time for your camp. An enticing offer that gets moms to sign up for camp RIGHT NOW could be just what you need to get a huge enrollment spike in a very short period of time — even just a few hours.

Last year I got 41 enrollments in 12 hours by doing a Mother’s Day Promotion via email where I offered a $7 discount per day (which was actually just rolling back prices to Early Bird rates which expired a few weeks earlier) to prior year families who hadn’t signed up yet. 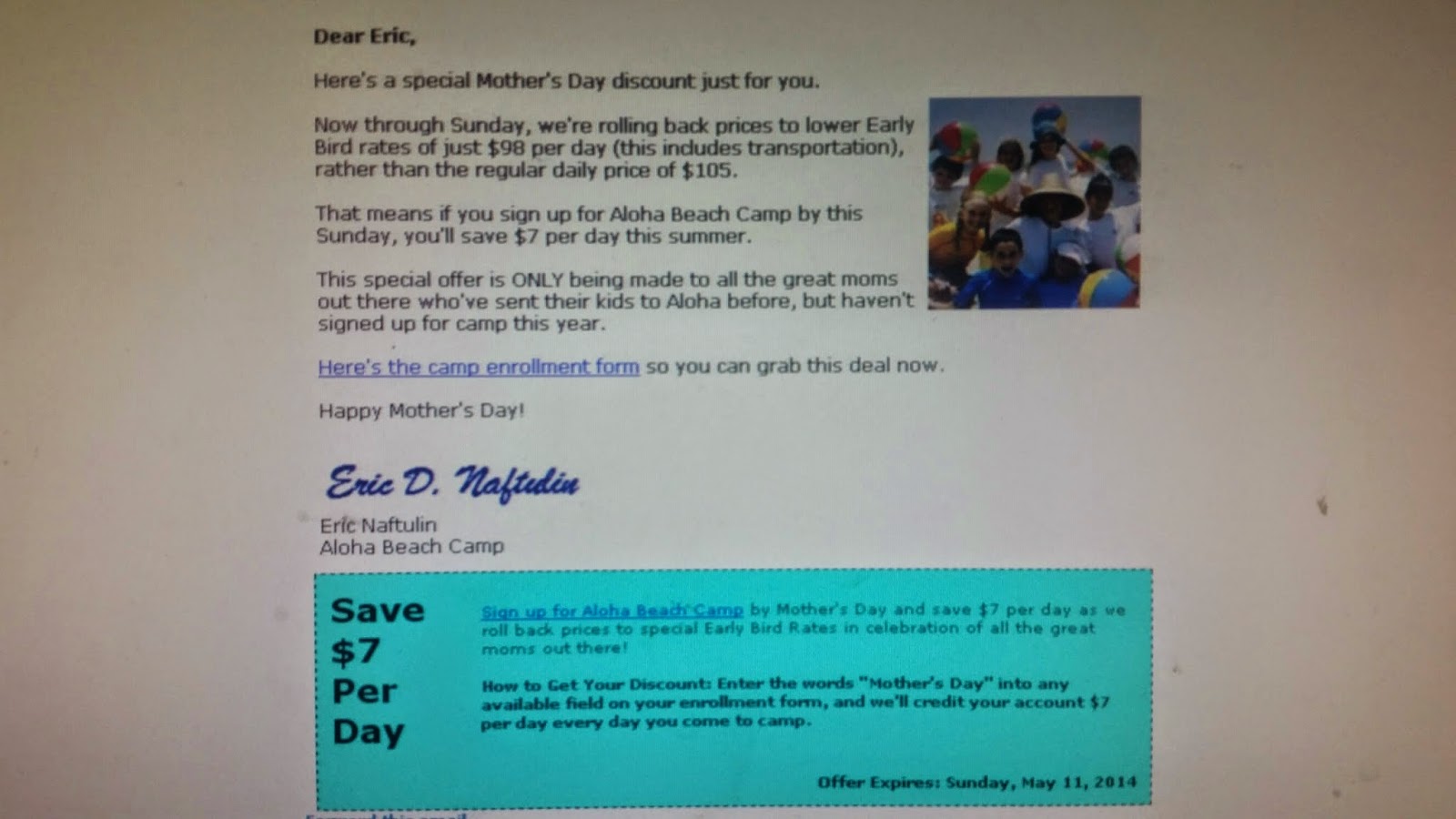 Now if I’m being honest, I pretty sure getting that many enrollments in just one day was some kind of fluke because it’s easily the single best enrollment day I’ve ever had in comparison to the work required (basically typing a 15 minute email message) to get all those enrollments in the first place.

But I’m definitely doing it again this Mother’s Day, and if I only get half that many sign-ups this time, I’ll be happy.

I realize some camps don’t like giving discounts. But if you want to generate a bunch of new money in short period of time, this is one of the best ways to do it. You need to think of what you’re getting — a ton of new enrollment in no time flat — compared to what you’re not. (There’s no way 41 people would’ve signed up for Aloha Beach Camp in 12 hours on Mother’s Day without this promotion.)

If you decide to do something like this for your camp, keep a few things in mind.

Your promotion needs to stand out and really catch the eye of your target market (moms), because everyone and their brother saves their best marketing gimmicks and promotions for Holidays. You’ll be competing against flower shops, candy companies, restaurants offering Mother’s Day Brunch, all of that.

At the same time, you shouldn’t have too much trouble, because simply by virtue of being a camp, you’ve got a HUGE head-start over all those other brands. That’s because Mother’s Day is the time of year Moms are thinking of camp anyway. Offering a small discount in connection with Mother’s Day is a timely, relevant summer camp marketing strategy that can work wonders for your program.